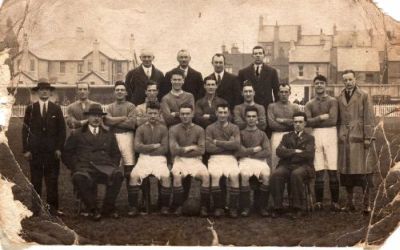 EARLY YEARS
​
The late twenties and thirties were times of economic depression, money was scarce, gates disappointing and the club had to be run on a shoe-string. Against this background, Bangor were able to field a team which was able to keep its head above water, though often to be found in the lower half of the league.
​
At that time Bangor FC played at the Ballyholme Showgrounds where they had moved from their second home in Castle Street in 1923. They Showgrounds were situated just behind the Ballyholme Esplanade and, being sand based, had one of the best and robust surfaces in the Irish League. In 1934, the club was given notice to quit as the ground was required for building houses ; Sandringham Drive now occupies the site.
After a season when all games had to be played away from home and which almost saw the demise of the club, Bangor moved in 1935 to their present home at Clandeboye Park which was provided by Bangor Borough Council.Clandeboye Park has been the home of Bangor Football Club since 1935. 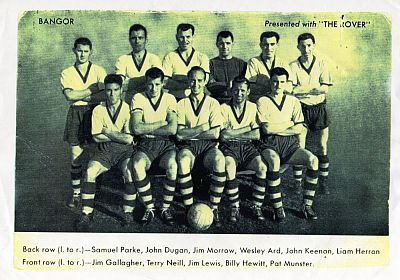 ​​The first match to be played at Clandeboye Park was on 14th September 1935 when Cliftonville recorded a 1-0 victory over Bangor.

In the 1960's, Clandeboye Park was regularly used as a venue for go-karting and stock car racing. Parts of the tarmac track still remain under the gravel around the pitch perimeter.
​
The current floodlighting system was installed at Clandeboye Park in 1987. The first match to be played under lights was a 2nd Round Roadferry League Cup tie on 4th November 1987 when Bangor defeated Ballymena United 2-1. However Bangor were later dismissed from the competition when it was discovered that they had fielded an ineligible player - Stephen Barnes.

The original wooden clubhouse which was situated on the Clandeboye Road side of the ground but was demolished in the 1990's to make way for additional covered terracing. The current clubhouse was built in 1980 and boasts an excellent view of the ground from the upstairs lounge. ​ 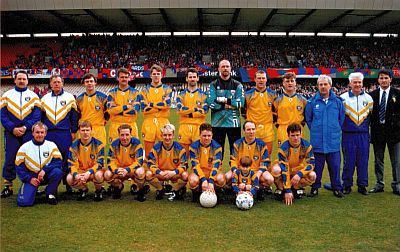 ​​Bangor enjoyed the most successful period in its history during the 1990s when the club qualified for Europe for the first time in its history after finishing second in the Irish League. This success was followed by winning the Irish Cup in 1993 after two replays against bitter rivals, Ards. Paul Byrne, who scored the winning goal with the last kick of the game, moved on to Celtic.

Three European ties have been played at Clandeboye Park - Bangor 0-3 Olomouc Sigma (1991) ; Bangor 1-1 Apoel Nicosia (1993); Bangor 0-1 Tatran Presov (1994). Clandeboye Park has also been used on numerous occasions as a training ground for both the Northern Ireland and visiting international squads. ​​

In October 2007, the club announced that a deal had been struck with property developers to sell land at the rear of the ground and use this to clear all debts. On 13 May 2008, it was announced that Bangor had secured a place in the new 12-team JJB Sports Premiership for the 2008/09, season despite only having finished third in the IFA Intermediate League First Division in 2007/08.
​​
Unfortunately, their stay in the Premiership only lasted a season as midway through the campaign the Club decided not to re-apply for the Domestic Licence that was required to compete at this level. As a result, Bangor FC were relegated at the end of the season and in season 2009/10 they competed in the Championship 1 league. The first season back in Intermediate football proved quite difficult with a hastily arranged, young squad. A draw in the penultimate match of the season against Ballymoney United ensured that they avoided the ignominy of relegation to Championship 2 by a single point.
​
On 18 September 2010, it was announced on the Bangor FC website that manager Colin McCurdy had resigned from his position. Frankie Wilson was announced as Colin McCurdy's replacement on 30 September 2010. A talented midfielder, Frankie began his Irish League playing career at Ballyclare Comrades in November 1991. He later had spells at Carrick Rangers and Omagh Town before joining Bangor in December 2001. Frankie made 35 starting appearances and scored 7 goals for Bangor before returning to Omagh Town in the summer of 2003. More recently, Frankie was assistant manager to Marty Tabb during his short spell at Donegal Celtic.
​
In his first full season in charge, Frankie Wilson guided the side to its first trophy since 2005 when they won the Steel & Sons Cup. This was secured on Christmas Eve, 24 December 2011 when they defeated Larne 2-1 in front of a large crowd at Seaview in Belfast. Gareth McLaughlin and Man of the Match, Garth Scates were the scorers.
​​​
Local rivals, Ards FC played their home matches at Clandeboye Park from the start of the 2003/04 season until the end of the 2007/08 season. They returned for a second period at the beginning of the 2012/13 season.

The pitch-side facade of the clubhouse was altered in 2008 to create a larger Press/ Media Room. The boundary of the ground was also revised in 2008 with the sale of some land behind the goal at the top end of the ground. 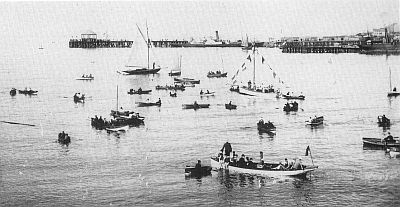 ​​The first Bangor FC was founded, according to local legend, in 1914 in a rowing boat on Bangor Bay. When The Great War was declared in the August of that year, football was abandoned in Bangor as many young men rushed to join up and the then leading junior teams in the town, Bangor Rangers and Clifton Amateurs, folded. Soon, however, two enthusiasts, Bob Lindsay and Jimmy Savage, found they could not face the prospect of a winter without football and so the idea of a “Bangor FC” was born as they discussed the situation when out for a row in the bay.

Back on dry land, a committee was formed and the new Bangor FC played at the Recreation Ground off the Brunswick Road, as a successful member of the Irish Football Alliance. However in August 1918, Bangor FC wound up its affairs as there was a feeling amongst some members that it was wrong to be playing sport while young men wee being slaughtered in the carnage of Flanders. Others were convinced that life should continue as normally as possible and within a matter of days a “new” Bangor FC was born, taking over the fixtures and many of the players of the “old” Bangor FC.
Encouraged by early success, Bangor joined the then Intermediate league where they played until gaining admission into the Irish League in 1927. Their first senior match was a local derby against Ards at Castlereagh Park on August 20, 1927. 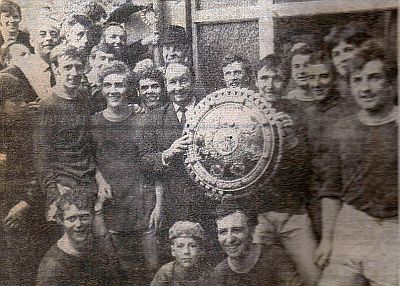 ​Bangor FC won their first senior trophy on 22 May 1970 when they defeated local rivals Ards in the final of the Co. Antrim Shield at solitude.. This was the fourth match in the final as the other three had ended in draws and it looked as if Bangor were not destined to make the breakthrough. The successful Bangor manager was the truly flamboyant Charlie Tully, the former Celtic and Northern Ireland star.

The scorers in the final, final game were Jim Herron, Brian Mulgrew and Ivan McAllister.​​ 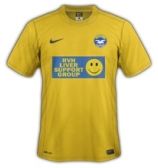 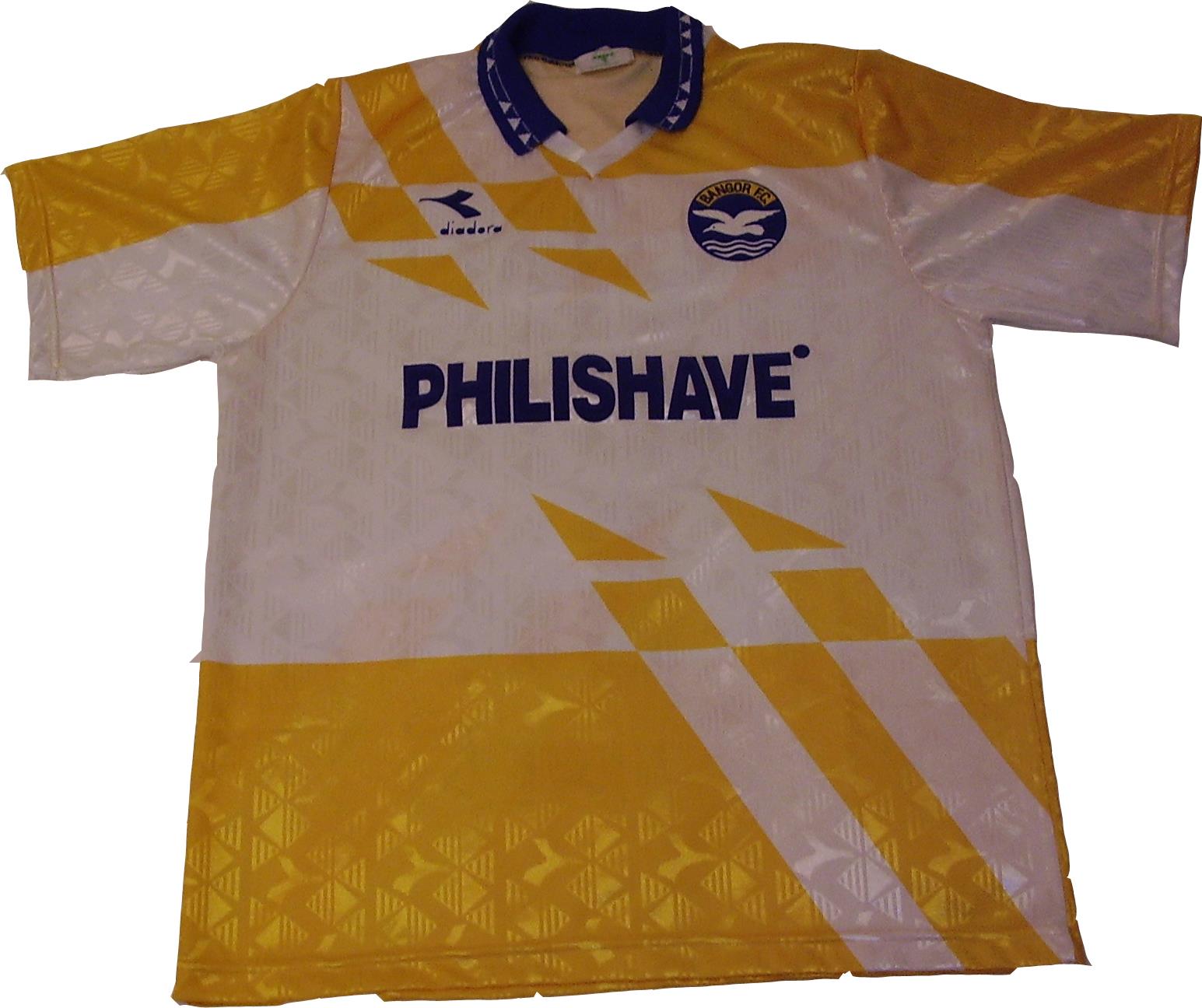 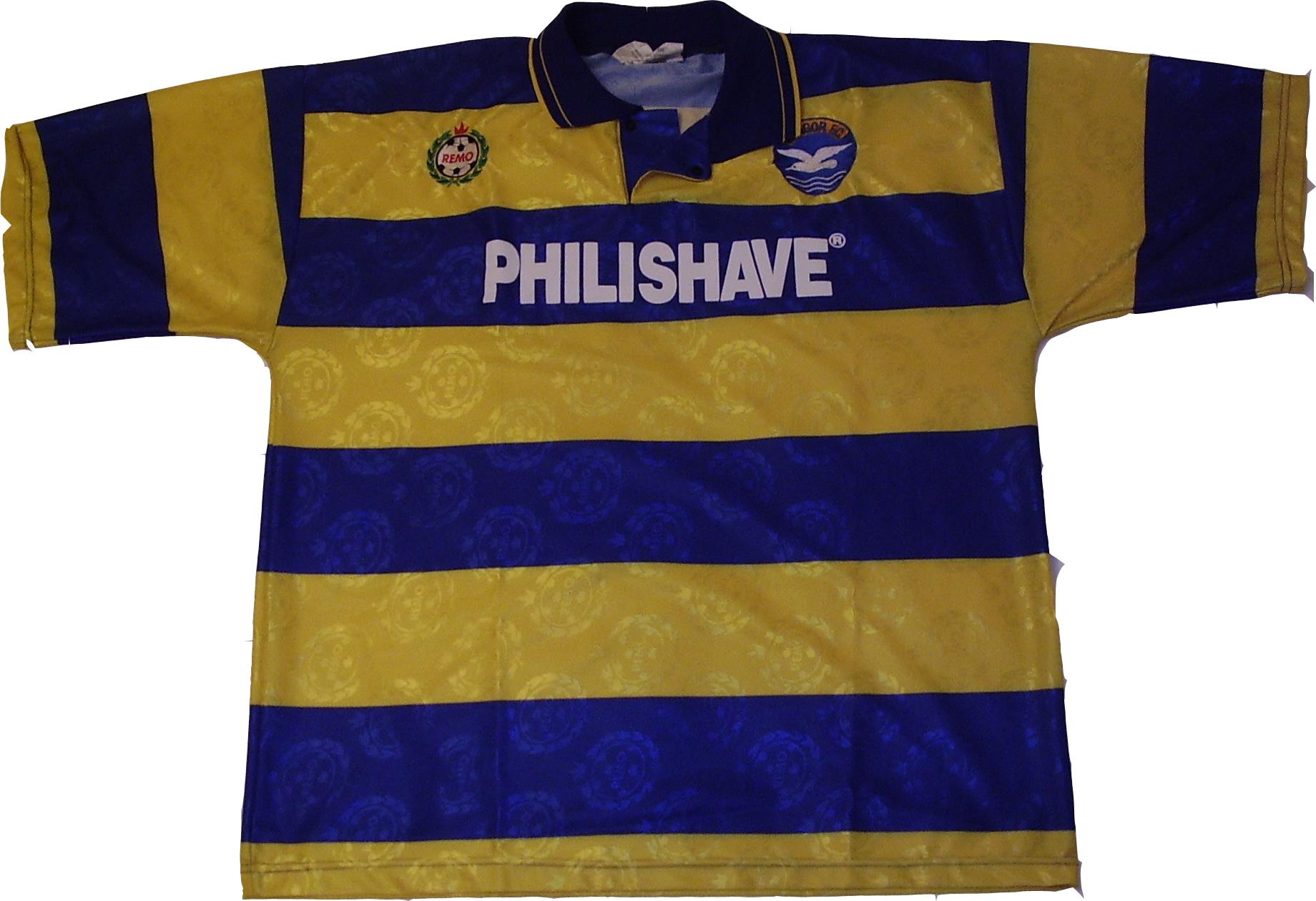 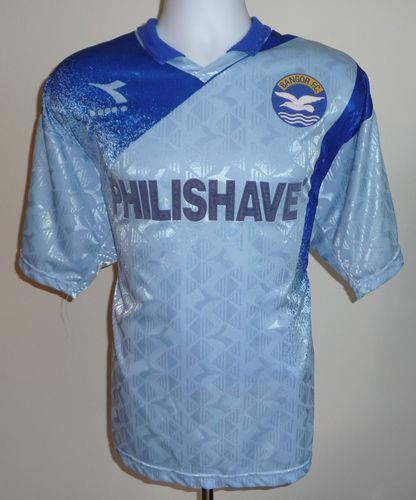 The official club colours are gold and blue, although in recent years the gold has been replaced by yellow as this is the shade more commonly used by kit manufacturers. The original colours were blue shirts and white shorts but the club changed these to gold and blue before the Second World War as a mark of thanks to Bangor Borough Council who donated them the land on the Clandeboye Road where Clandeboye Park now stands. Gold and blue are traditional Bangor colours with the gold representing sand and the blue representing the sea. After a few seasons playing in an all yellow kit, Bangor reverted to yellow shirts and blue shorts season 2010/11. For season 2011/12, Bangor introduced a yellow and blue stripped shirt for their home kit and a new white away shirt with yellow and blue trim. For the current season, the club have reverted back to plain yellow shirts for the current season.